How to implement Go §

As I wanted to make an automated Go player, as I planned on a previous article, I first needed a full implementation of the game of Go.

Go is a beautiful, tremendously old game with very simple rules and yet tremendous subtlety. Here are the rules: 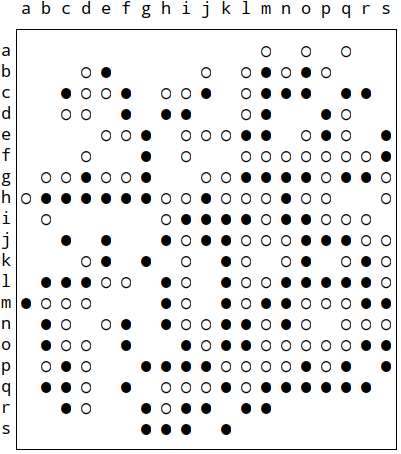 Since the board is a compact 2-dimensional space, we use an array, with each slot containing an intersection which includes its state (empty, with a white stone, etc.) and historical and analytical information for use by the learning systems: whether it is a legal move, when it last received a move, whether it is the atari liberty of a group, ie. the move that captures the group, and how many stones it captures.

We also keep track of all groups on the board. Each intersection links to its group, and the group maintains a set of its stones, and another of its liberties. When registering a move, groups are updated. It is fast, since at most four groups may need updating.

There is some logic to merge groups together, destroying the original groups, and creating a new one that contains the union of the previous ones. It is not particularly fast (and could likely be improved by keeping the largest group and adding the others to it), but since merging groups does not happen on every turn, it did not seem to matter that much for now.

The most complicated function is inevitably the logic for computing a move. We must look at surrounding intersections and their groups, to assess whether the move is a suicide (and therefore invalid), and when it captures enemy stones.

Most operations are essentially constant-time, apart from group merging, since the number of impacted groups is bounded, and all operations are set updates.

Detecting a match into previous board configurations is probably the trickier part of the system. Fortunately, a subtle algorithm for it already exists: Zobrist hashing.

It relies on a smart hashing system, where each possible board configuration is mapped to a unique hash. Trivial hashes would be too slow: your first guesses for a hash probably require to read the whole board. Instead, a Zobrist hash is similar to a rolling hash, in that it only needs a single update to account for the forward change.

You start with a hash of zero for the blank board. When initializing the board, you generate a random 64-bit value (or, when you are like me and use JS, a 32-bit integer) for each intersection on the board, and for each move that can be made on that position (place a black stone, or place a white stone).

To compute the hash for a new board configuration, you take the hash of the previous board. For every change on the board, you XOR the previous hash with the random value associated with this particular change.

For instance, if you place a black stone on A19 and it captures a white stone on B19, you will XOR the hash with the random value for “black A19”, and then XOR it with “white B19”. Fun fact: it yields the same value if you do it the other way around.

The bulk of scoring is establishing territories. To make things simple, we assume the game went to its final conclusion, where there are no gray zones. All regions are either surrounded by white or black, and there are no capturable stones left.

All that remains is to go through intersections in reading order, top to bottom, left to right, and to stitch each empty spot to its neighbor territories, potentially joining two larger territories together if necessary. Any stone that is next to the territory gives it its color.

It makes counting points fairly easy: add komi, capture, stones on board, and own territory, and the trick is done.

Having implemented the game rules is not enough to properly train bots on it.

For starters, we need an SGF parser to extract information about the moves of existing games. SGF (Simple Game Format) is the main format for serializing Go games.

Then, we want to support GTP: the Go Text Protocol is the most common format for transmitting remote commands between a Go implementation and a robot player.

Finally, we will explore various techniques for AI design.